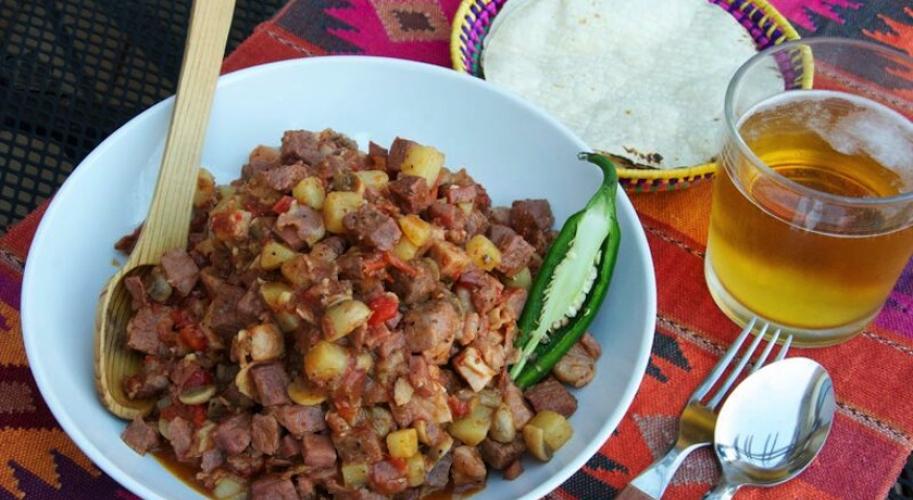 Discada is a typical northern Mexican dish that has its beginnings in the fields, where laborers plowed the land prior to seeding the fields. The story tells of a man who was behind in his work and did not want to go home to eat or he would never finish his chores. He noticed one of the discs in his plow was dull, so he changed it. He had the brilliant idea to use it to cook his meal, but as he did not have much to cook, he started to ask his fellow farm hands if they wanted to contribute something to the pot... and that’s how they started to use the disc as a “wok” to make a meat-laden sort of stir-fry that made a great taco filling.

At the beginning there was not much variety in the pot, but as the men brought more ingredients the farmer made a delicious meal that was enjoyed by all. The making of discadas has become a ritual in northern Mexico and a perfect way to spend time with friends.

Making a discada is the closest thing to “wokking” that there is in Mexican cookery. The round shape of the disc is close to the shape of a wok, except maybe a bit more shallow. The original discadas were made mostly of meat, and to this day, it continues to be a meat-laden meal. Modern cooks add aromatics and vegetables to make a more rounded meal.

Usually, the cooks who make discadas are male and they cook with beer-in-hand. They start cooking off the bacon so it renders its fat and then use that fat to cook the rest of the meats. As the meats cook, they are pushed towards the edge. Later on the onions, garlic, and chiles are added, followed by the tomatoes and other vegetables. They douse everything with beer and let it reduce and you have a meal that makes the best tacos ever.

Discadas are delicious and can feed a crowd, so invite your friends over!