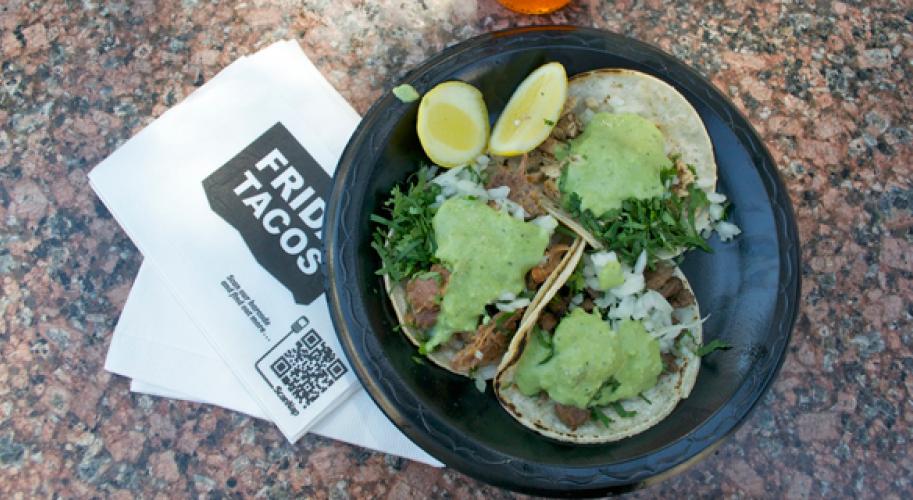 While most of America has been whipping itself into a fit over the NCAA’s March Madness tournament, which comes to a close tonight with a final match between the U. Kentucky Wildcats and the Connecticut Huskies, Los Angelenos chose a decidedly more delicious diversion for the month of March: Taco Madness 2014.

Taco Madness, presented by website LA Taco (its slogan: “Celebrating the taco lifestyle in Los Angeles”), is a yearly event that uses the March Madness model to determine the top vendor among the formidable sea of taco-slinging trucks and shops in the City of Angels. Both judges and the good people of Los Angeles get to have a say in the final winner. Starting March 10th, 32 vendors competed, two pitted against each other at a time, all throughout the month, but only one came out the winner last Saturday at Downtown LA’s Grand Park.

Bumped out of contention along the way early were faves like Kogi BBQ and Mexicali & Co., until the competition was whittled down to two: popular taco truck Mariscos Jalisco and brick and mortar shop El Coraloense, both specializing in seafood delicacies like tacos de camarones and tostadas de ceviche.

While El Coralense didn’t make an appearance at Saturday’s event, plenty of other participants came out on what was a gorgeous day in Grand Park. Frida’s Tacos, Mariscos Jalisco, Guerrilla Tacos, Los Originales Tacos Arabes de Puebla, Plant Food For People, and many more served hungry crowds at the Groupon-sponsored event, and no one went hungry. The brother-sister duo Bricia and Fernanado Lopez’s restaurants La Guelaguetza presided over a popular pop-up bar with beer and micheladas. The event also featured many local street artists, including LA’s Hit + Run Crew, as well as DJ sets by Canyon Cody, Cee Brown, Mario Cotto, and Panamami.

Ultimately, El Coralense took home the prize for their crustacean taco creations, but ‘Best in Show’ Saturday was given to Romulo “Momo” Acosta of Carnitas el Momo for his scrumptious swine tacos. Acosta served four Guanajuato-style tacos with fillings (carnitas, stomach, skin, and migajas,or pan drippings) tucked into warmed doubled corn tortillas. Judging by the line at his station, the judges were not the only impressed parties in the crowd. The tacos de migajas were spruced up with guacamole, nopales, and a few pickled jalapeños from the condiment bar and washed down with a cold beer from Venice Duck Brewery on one of the sunny, multi-level lawns at Grand Park. As far as this writer is concerned, those tacos were a slam dunk.