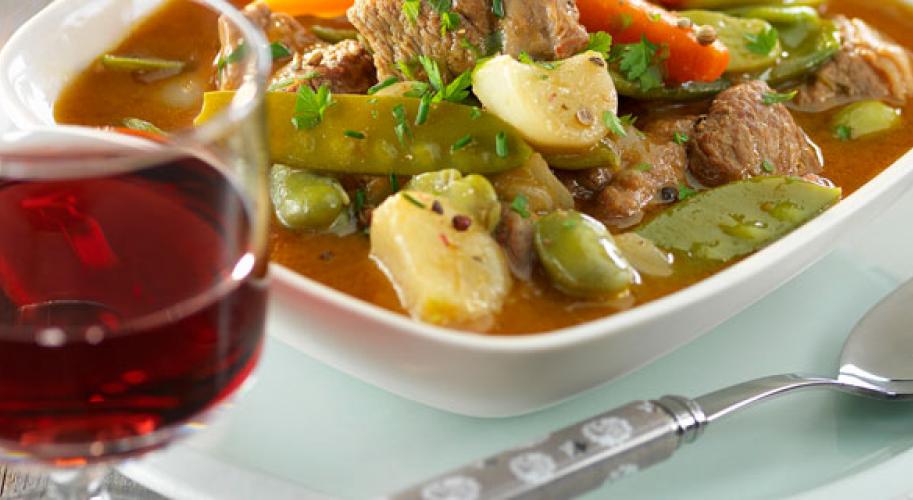 As the post-holiday chill of winter sets in, we begin to crave hearty soups and stews that warm the kitchen and fill the house with delicious aromas as they bubble away on the stove. When it’s time to serve your guiso or guisado—or even a rich sopa—be sure to have a bottle or two of Garnacha on hand to serve alongside those steaming bowls of goodness.

Garnacha (also known as Grenache in France and other countries) is a red grape that is native to northern Spain. D.O.P. Cariñena in the northeast of Spain is the nation’s leading producer of old-vine Garnacha. Located in the region of Aragon, Cariñena is south of the Pyrenees and the French border, just west of Catalunya. There are over 35,000 acres of vineyards here. Rocky soils add strong mineral flavors to the finished wines, and hot days and cool nights are ideal for creating wines with rich fruit flavors and balanced acidity.

Garnacha is also blended with Cabernet Sauvignon, Syrah, and Cariñena, which is the other main grape of this ruggedly beautiful wine region. The strong fruit and spice flavors of Garnacha pair well with meat-based stews and soups, while the mineral notes are a nice complement to the beans or potatoes that anchor these dishes. Many of the wines are a good value, so it’s an easy decision to open more than one. Here are some of our favorite Garnacha-based wines from Cariñena.

Bodegas San Valero Particular Garnacha 2013: (Suggested Retail Price $10) This rich, fruity, 100% Garnacha has full-on berry flavors and soft tannins that won’t overpower pork or chicken dishes. It's round in the mouth, but the silky texture pairs well with dishes that have a healthy dose of spice in them.

Bodegas Paniza Agoston Garnacha-Syrah 2013: (SRP $13) Ganacha and Syrah are blended 50/50 in this wine and those are both go-to grapes for spicy food. The wild boar on the label is a good clue that this one may also go well with pork. Powerful flavors of black cherry and cassis are accented by a touch of black pepper, and the easy-drinking style is a good match for pork stews with white beans.

Grandes Vinos y Viñedos Beso de Vino Old Vine Garnacha 2011: (SRP $10) Don’t be fooled by the cutesy label with an image of a bull drinking red wine. There is serious but well-priced Garnacha in this bottle. Luscious berry pie flavors with a touch of lavender and bright citrus peel finish stand up to beef or lamb and light tannins are tailor-made for foods with a stronger spice profile.

Next, more garnachas to try...

Bodegas Paniza Artigazo 2008: (SRP $28) Made from 40% Garnacha, 30% Syrah, and 30% Cabernet Sauvignon, this is the weightiest wine of the bunch and one that is ideally suited for serving on special occasions. It spends 18 months in oak barrels, so it has strong tannins that pair nicely with well-marbled cuts of beef like short ribs or brisket and a little less spice in the cazuela. Expect lush blackberry and raspberry favors with notes of Mediterranean herbs and touches of chocolate and clove.

Bodegas San Valero Castillo de Monséran Old Vine Garnacha 2009: (SRP $16) This wine is produced from vines that are at least 50 years old, leading to a higher concentration of flavor. Twelve months in oak barrels add smooth tannins that are a pleasing companion to flavors of raspberry, currant, vanilla, and a soft dose of anise. Serve with a rib-sticking lamb stew featuring Andalucian spices like cinnamon and cumin.

Grandes Vinos y Viñedos Corona d’Aragon Special Selection 2011: (SRP $15) Produced in tribute to King James I of Aragon, a 13th century ruler of the region, this is a blend of Garnacha and Cariñena. It has flavors of black cherry, raspberry, and vanilla with a nice touch of smokiness that would go well with pork or beef stews flavored with paprika or small amounts of habanero.