Bell-bottomed wine lovers of the 1970s took to Chardonnay like groupies to a rock band. And like some musicians, the buttery, oaky wine enjoyed decades of popularity. But another wine is gaining rock-star status across all market segments, and it’s not a passing fad. Say hello to Moscato.

Moscato, also known as Muscat, Moscatel and Muscat Canelli, among dozens of other monikers, “is here to stay,” says Marcy Whitman, senior vice president of marketing at Palm Bay International, a wine and spirits distributor based in Boca Raton. “It’s gotten incredibly popular in the last couple of years, outpacing the growth of all wine categories.” 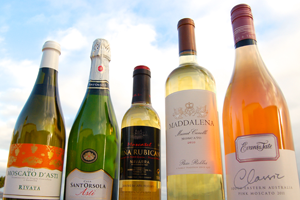 Part of the appeal lies in its versatility. Moscato, a warm-weather grape dating back to ancient Greece and Rome, can be made still or sparkling, white or pink, sweet or dry. With intoxicating aromas of peach and orange blossoms, Moscato gives Italy’s Asti Spumante its honeyed taste. In fact, some wine historians theorize that the name Muscat comes from musca, the Latin word for "fly", because the grape’s potent scent and inherent sweetness attracted the pesky critters.

Ironically, it’s the sugared character of Moscato that made it a pariah in the wine world shortly after Chardonnay was crowned belle of the ball. “I remember a time when Asti Spumante became the wine you didn’t drink,” recalls Joyce Zizzo, a certified sommelier and wine manager at Total Wine & More in Redondo Beach, California. In addition, inexpensive rosé wines produced in the 1970s gained notoriety for being insipid and low-grade. As a result, quality rosés including pink Moscatos were stigmatized.

But consumer tastes evolve, and Zizzo attributes Moscato’s increasing popularity to a desire for the polar opposite of Chardonnay’s wood-influenced flavors. Interestingly, Latinos are one of the market segments driving Moscato’s new fame, according to Whitman. Also worth noting, she says, is that Moscato’s appeal spans all income brackets.

There are three kinds of Muscat grapes used to make the wine: Muscat Blanc à Petits Grains has the most intense aromatics and is believed to produce a more elegant wine; Muscat of Alexandria, grown primarily for table grapes and raisins, is cultivated in Perú and Chile to make pisco; and Muscat Ottonel has the least aromatic profile. Ottonel grows well in cold climates so there is less sugar in the grape, which is ideal for dry Moscatos.

The wine’s multi-faceted profile makes it a suitable match for anything from a spicy main dish to a sugary dessert. Sweet Moscatos can take the burn off of an entrée like spicy pork tenderloins and harmonize with the tropical fruitiness of a guava empanada. Sparkling Moscatos are a posh way to start a brunch; drop a slice of fresh peach into the champagne flute for a splash of color. For a vibrant treat, pair a pink Moscato with a red raspberry tartlet.

While former glam rockers may want to keep the polyester bell-bottoms in the closet, sweet wine aficionados, says Whitman, are singing a new song. “They’ve come out of their shell and are proud of the fact that they love Moscato.”

[Watch] How to Make Ceviche: Peruvian Recipes in Under 1-Minute
[right]View More Videos[/right]