Chef Luciana “Uchi” Davidzon was born in Buenos Aires, Argentina. Coming from a medical family, she picked a different route, studying business administration at the University of Buenos Aires, and working for companies such as HSBC, KPMG, PriceWaterhouseCoopers, and Dannon, but after she moved to New York City eight years ago with her husband, she again decided it was time for a different path. With a passion for food fueling her decision, she founded Lola Mora, a boutique catering company and and enrolled in Pastry School at FCI NYC where she was awarded the “Les Dame D´Escoffier NYC 2010”.

One of the 70 Top Blogueras Latinas invited to the White House, today, most of Uchi’s time is spent in the kitchen testing new flavors, styling photographs and writing. A dessert writer and editor at About.com, a digital property of The New York Times Company, she also publishes the Latin Food Lovers blog, which was awarded the best food blog by Blogs By Latinas Awards 2011, and writes a column for The Huffington Post. 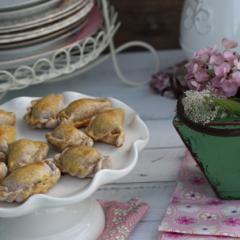 1342977853
Empanaditas are famous throughout Latin America. Some prefer them fried, others baked; some like to fill them with meat, while others choose vegetable fillings, from corn to spinach. My favorite? The spicy meat empanadita. They remind me of my many amazing trips to the north of Argentina and Bolivia. Regardless of their deliciousness, what we...
empanadas
whole wheat
recipes
appetizers
corn
Categories &raquo;
Type: Blog post
Link: Read More »