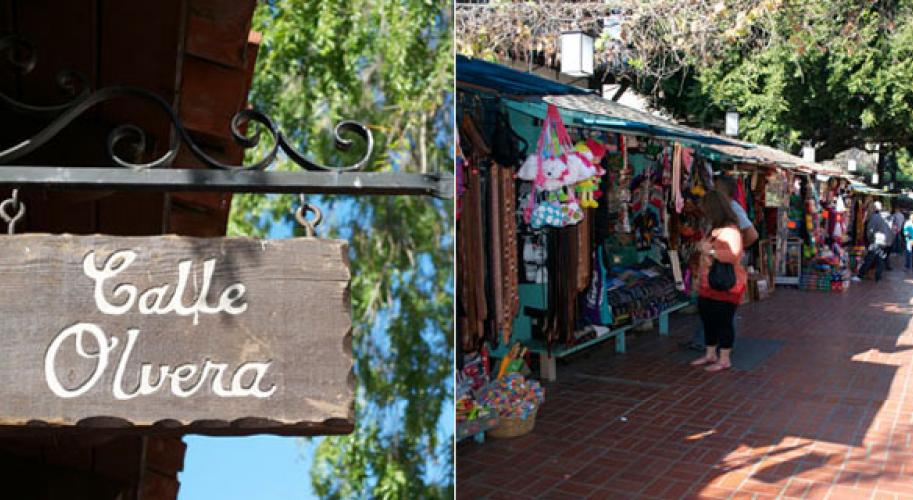 It’s a gorgeous day in Los Angeles. The sun is shining (of course) and you’ve been doing some shopping at a market downtown. You stop in El Paseo Inn for a bite and find a seat on the patio overlooking the marketplace. Santiago, your waiter, mixes up fresh guacamole tableside as you sip Negro Modelo with lime and sort through your purchases. Peruvian earrings. A hand-woven basket from Mexico. Candles to ward off evil spirits. A Lucha Libre mask. This is Olvera Street.

Just outside the restaurant, a woman with deep wrinkles in her brown skin, wearing a full skirt, poufy sleeves and a bedazzled cowboy hat, walks up to a Mariachi band crooning nearby. She requests an oldie but a goodie. A crowd starts to gather as band members start to play. The woman sways back and forth to the music, the folds of her skirt swishing. As she opens her mouth to sing, you notice she has a tiny diamond embedded into the front of every tooth. She sings in Spanish, so passionately that many of the eyes in the crowd are wet.

Olvera Street turned 84 this year. The open air market runs like a vein through El Pueblo de Los Angeles, the first settlement established in L.A. back in the 18th century, now a federally protected historical monument. But it wasn’t always the lively hub for Hispanic and immigrant culture that it is today.

In 1926 Los Angeleno Christine Sterling noticed that El Pueblo had fallen into disrepair. Buildings such as Avila Adobe, the first house in Los Angeles, were crumbling and the area was known for its shady characters.

Sterling was appalled. She immediately started advocating for El Pueblo’s restoration. She petitioned publications to run articles about the site and politicians to take it up as their cause. Sterling envisioned a central market where not only Los Angelenos could shop and eat, but also a place where tourists could come to learn about the city’s history and Hispanic culture.

To raise funds for the project, she held a barbeque in the Avila Adobe. Despite Prohibition, tequila flowed even though noted statesmen and the chief of police were invitees. They drank with gusto and Sterling raised the money she needed.

Today Olvera Street is home to over 70 merchant stalls and Latin food restaurants. It’s the center of Hispanic culture in Los Angeles, holds events for Cinco de Mayo, Mexican Independence, Semana Santa and more, and more than 2,000,000 visitors flock there each year. Avila Adobe, creamy white from regular maintenance, stands stoically in the center of it all as shoppers cruise by and tour the insides, just as Christine Sterling wanted it.

With Dia de Los Muertos just around the corner, it's a perfect time to plan your visit. Olvera Street will remember those dearly departed by hosting events November 1 and 2. Look out for nightly processions, or Novenarios, plus music, food, elaborately decorated alters complete with sugar skulls and more. Click here for more information.

[Watch] How to Make Ceviche: Peruvian Recipes in Under 1-Minute
[right]View More Videos[/right]