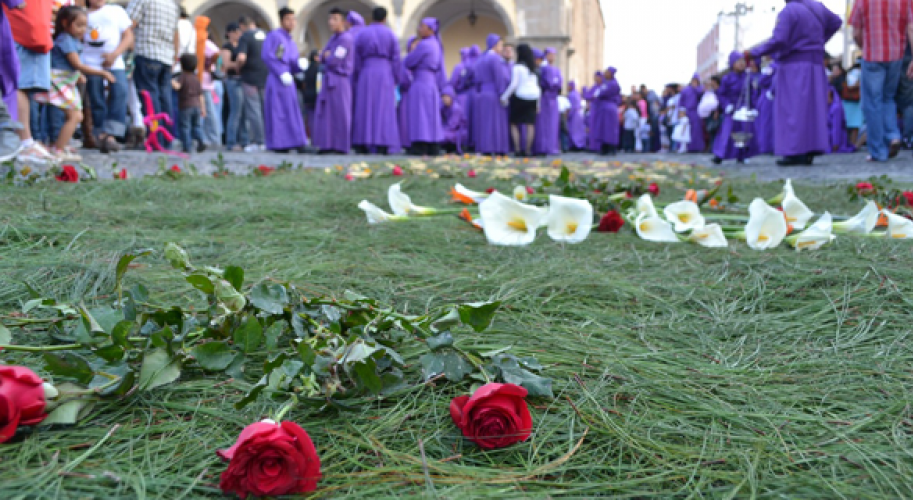 Dense clouds of incense-spiked smoke. Waves of purple-robed bodies. Pine and corozo and flowers stretched out like carpets leading to distant volcanoes. Floats the size of barges hand-carried through cobblestone streets. La cuaresma (Lent) kicks off March 5 with Ash Wednesday, and in La Antigua, Guatemala, it marks the unofficial start of the region’s busiest tourist season.

For the next forty days, including, Semana Santa (Holy Week) and Pascua (Easter), tens of thousands of tourists will descend on arguably the oldest and popular of Guatemala’s cities, it’s population engorging from a modest forty thousand to a snug hundred thousand, to experience the largest Lent and Easter celebration in the world. Churches are primped like a fifteen-year-old girl for her quinceañera, churchgoers fork over quetzales for the privilege of processing down streets with San Juan or Mary Magdalene or Jesus hoisted on their shoulders, and attempts to use anything but your feet for transportation will result in hair-pulling. But there’s no better place to truly immerse you in the Easter season. 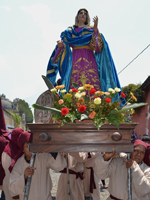 The tradition of Lent may have been brought over by Spanish invaders along with Christianity, but today, nowhere celebrates the Easter season quite like Antigua. Every Sunday starting after Ash Wednesday, processions put on by hermandades, or church groups, parade from churches of smaller, outlining towns like San Juan del Obispo or San Felipe de Jesus, to Antigua’s cathedral or La Merced, only to return back to the town they came from in the evening. Cucuruchos, men clad in purple robes, carry andas, or statues, through the streets.

These cucuruchos are carefully chosen by size and arranged by height so they can carry the anda level on their shoulders. Generally, an anda weighs about 7000 pounds, and is bookended by incense and banner carriers, as well as a 25-piece brass band wailing solemn marching music. Home owners and businesses along the route make alfombras, or carpets, out of colored sawdust, pine needles, wood shavings, flowers, fruits and vegetables and a particularly fragrant local pod called corozo. It’s a great honor to have hours of hard work destroyed when a procession tramples the alfombra.

When Semana Santa rolls around, processions are daily, sometimes semi-daily. Food and knickknack vendors set up permanent residence on their favorite corners and sell everything from empanadas de leche to balloons to coconut bread to mini-cucuruchos on sticks for the kids. Holy Thursday is an all-night affair, with Guatemalans and tourists alike alternating from somber procession watching to lively barhopping or street drinking. Through all of this, a band of ‘Romans’ roam mounted on horses or on foot through the streets, a re-enactment of real Romans looking for Jesus over two thousand years ago. In the wee hours of Friday morning, a procession will leave from La Merced and another from Escuela de Cristo, with black-clad cucuruchos hoisting andas depicting Jesus nailed to the cross. Watchers generally stay up all day Friday to follow the processions, watching until the andas return to the churches they came from. Once Jesus enters the church, he won’t be seen again until Sunday morning. By the time Pascua actually arrives, everyone is fairly spent, but joy is palpable in the air as churches change their dark mourning colors to celebrant whites and purples and yellows.

If you plan to make the trip in 2014, book now! Flight prices will soar and hotels will be impossible to find. Watch out for scams and pickpocket artists, who decamp from Guatemala City along with tourists for the holiday. Local tourist hubs are set up in Parque Central all of Lent to answer your questions and hand out maps, so you won’t miss any of the action.

[Watch] How to Make Quinoa Salad with Hominy: Mexican Recipes in Under 1-Minute
[right]View More Videos[/right]